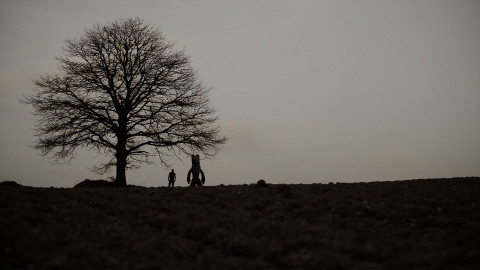 Steph Cop, born in 1968 in France.
At the end of the 80s, Steph Cop will be part of the first wave of the French Graffiti movement. Activist in the group "Control of Paris", they are remarkable among other things by covering the fences of the Pyramid of the Louvre when it was built in 1986, and Steph Cop imposes itself as one of the artists of the French graffiti movement.
In 1992, he took part in the creation of a new trend, later defined as "streetwear", through his "Homecore" and "Lady Soul" clothing brands.
In 1998, Steph moved to the physical representation of a graphic world by creating one of the first "Art Toy" with his character Vinyl A.R.O, Analyze Reflexe Obsessionnelle, which sells all over the world.
In 2007, he chose to retire in the middle of the Morvan forests to recreate ARO. Quickly spotted by the gallerists, ARO trains the artist to exhibit on several continents.
In 2012, an American art foundation based in France organizes its first retrospective. This is followed by the creation of the ARO 5.0, a 5-meter / 7-ton work, carved from a 600-year-old tree, and financed by 30 collectors.
ARO continues to evolve in form and material to the son of the exhibitions.
Today Steph COP is working on the realization of the ARO 8.0, 8 meters / 27 tons of wood and steel, supported by 50 collectors. This project is expected to materialize in 2018 …